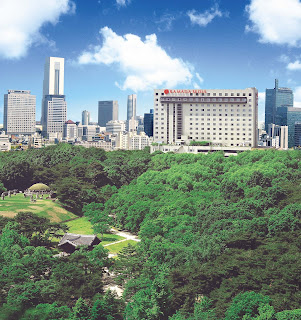 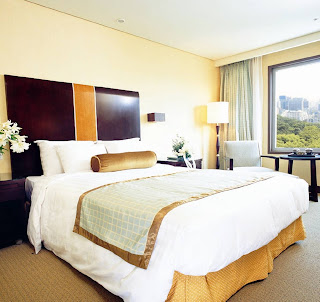 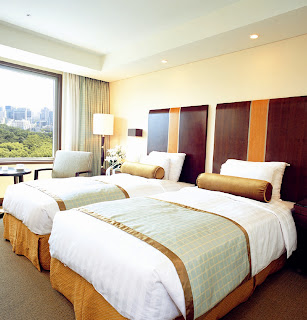 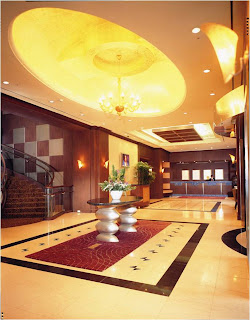 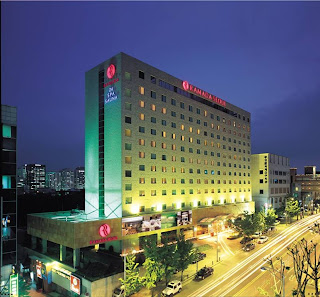 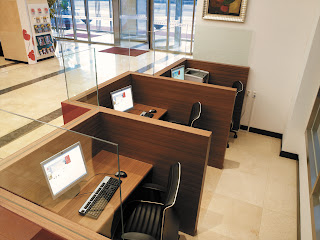 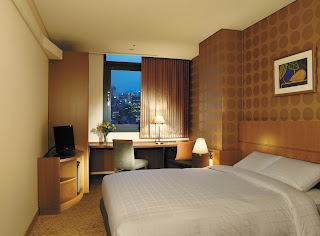 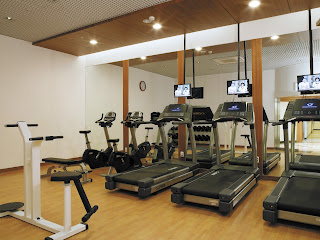 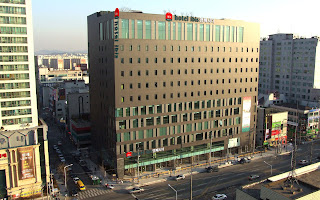 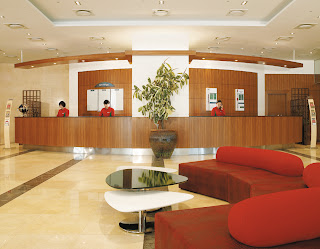 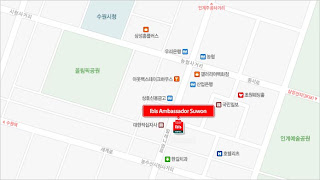 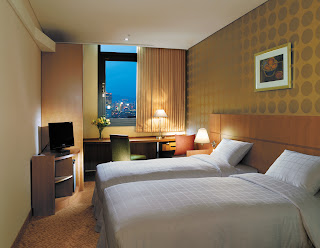 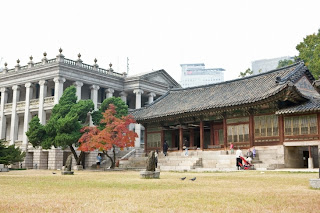 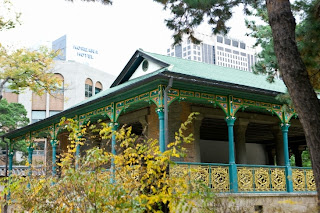 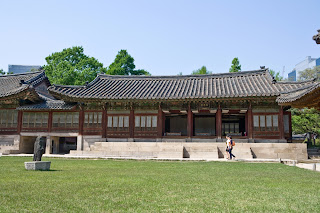 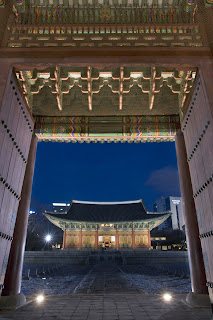 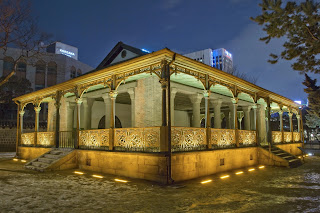 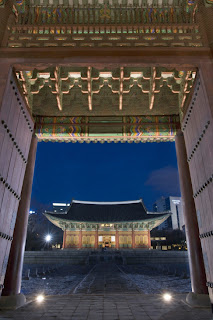 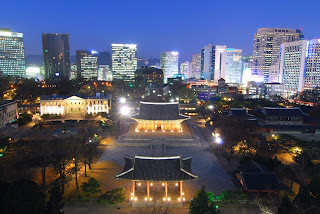 ocated at the corner of Seoul's busiest downtown intersection, Deoksugung Palace is famous for its elegant stone-wall road. It is also the only palace that sits alongside a series of western style buildings that add to the uniqueness of the surrounding scenery. Deoksugung Palace originally belonged to Wolsandaegun (1454~1488), the older brother of King Seongjong (1469~1494) of the Joseon Dynasty. It became a proper palace when Gwanghaegun (1575~1641) ascended the throne and gave the palace the name Gyeongungung in 1611. Afterwards, the name was then changed back to its orginal title of Deoksugung.
Upon entering Deoksugung Palace and Daehanmun, visitors will cross the wide bridge of Geumcheon. The king's carriage would pass over this bridge during ancient times. The Beopjeon Building Junghwajeon is very stately, revealing of its long history. The Jeukjodang Building received its name from Gwanghaegun and In-Jo both ascended to the throne here. The front sign on Jeukjodang was written personally by Go Jong in 1905 after he became king. Hamnyeongjeon was where Go Jong slept, and Hamnyeong was named so to wish Go Jong lasting peace. The East Wing served as the King’s room, and the west wing was for the Queen. Jeonggwanheon was the first western style building built in the palace in 1900. Go Jong enjoyed drinking coffee and spending his free time here. The back of the building had secret passageways to the Russian Emissary, which still exist today.
Seokjojeon is the other western-style building that still remains in Deoksugung, and it was in the process of being built by a British man for his company when in 1905 the property rights were transferred to Japan. It was finally completed in 1910. After Gojong’s death, Seokjojeon became a Japanese art gallery open to the public. After the Korean Declaration of Independence, the American-Russian joint commission was held here as well in May 1946. The east wing of Seokjogwan building now serves as a Palace Treasure exhibition, and the west wing is used as part of National Modern Arts Center.
The Junghwajeon (Junghwa Hall) was the center of politics during the period of Daehanjeguk (the Great Korean Empire) and served as the backdrop to critical discussions on national affairs among the country’s great leaders. The elaborateness of the hall’s interior is said to reflect the confidence of King Gojong (26th king of the Joseon Dynasty, reigning 1863-1907) in his ability to effectual lead the country into the 20th century. One of the most striking parts of the building is the pair of dragons that decorates the canopy above the throne of the king. These dragons can be also seen on the ceiling of Junghwajeon and were representative designs of the Deoksugung (Palace), the imperial palace at that time. Though the Junghwajeon was originally built in 1902 as a multi-roofed building, it was redesigned as a single-roofed building in 1906 after it caught on fire in 1904.
The Junghwa Hall is one of the historical centers of Deoksugung (Palace), which stands proudly alongside other notable buildings at the palace, such as: Seokeodang, Junmyeongdang, Jeukjodang, Jeonggwanheon, Deokhongjeon, Borugak, and Jagyeokru. 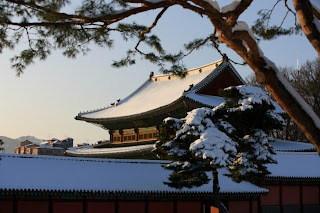 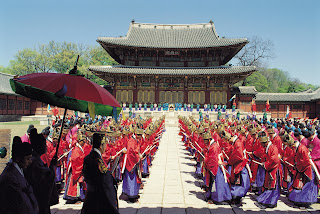 Changdeokgung Palace was the second royal villa built following the construction of Gyeongbukgung Palace in 1405. It was the principal palace for many of the Joseon kings and is the most well-preserved of the five remaining royal Joseon palaces. The palace grounds are comprised of a public palace area, a royal family residence building, and the rear garden. Known as a place of rest for the kings, the rear garden boasts a gigantic tree that is over 300 years old, a small pond, and a pavilion.
The palace gained in importance starting from the time of 9th king of Joseon, Seongjong, when a number of kings began using it as a place of residence. Unfortunately, the palace was burned down by angry citizens in 1592 when the royal family fled their abode during the Japanese Invasion of Korea. Thanks to Gwanghaegun, the palace was restored in 1611. Even today, it holds a number of cultural treasures such as Injeongjeon Hall, Daejojeon Hall, Seonjeongjeon Hall, and Nakseonjae. 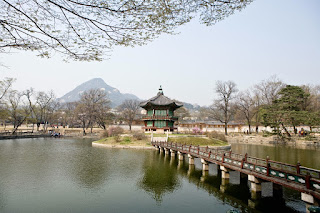 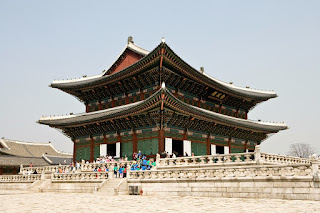 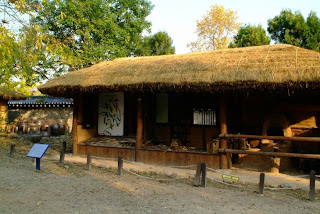 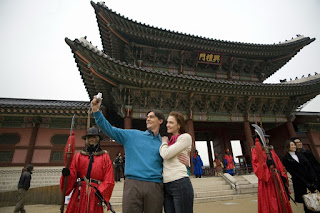 Built in 1395, Gyeongbokgung Palace is also commonly referred to as the “Northern Palace” because it is the furthest north when compared to the neighboring palaces of Changdeokgung (Eastern Palace) and Gyeongheegung (Western Palace). Gyeongbokgung Palace is arguably the most beautiful and remains the grandest of all five palaces.
The premises were destroyed by fire at the time of Japanese occupation from 1592-1598. However, all of the palace's 7,700 rooms were later restored under the leadership of Heungseondaewongun during the reign of King Gojong (1852~1919) .
Remarkably, the most representative edifices of the Joseon Dynasty, Gyeonghoe-ru Pavilion and Hyangwonjeong Pond are still relatively in tact. Woldae and the sculptures of Geunjeongjeon (The Royal Audience Chamber) represent past sculpture of contemporary art.
The National Palace Museum of Korea is located south of Heungnyemun Gate, and the National Folk Museum is located east within Hyangwonjeong.